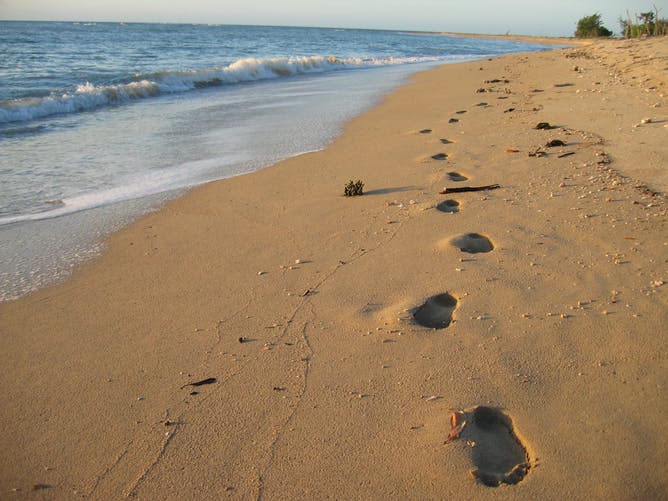 One of the most ancient peopling events of the great diaspora of anatomically modern humans out of Africa more than 50,000 years ago — human arrival in the great continent of Sahul (New Guinea, mainland Australia & Tasmania joined during periods of low sea level) — remains mysterious. The entry routes taken, whether migration was directed or accidental, and just how many people were needed to ensure population viability are shrouded by the mists of time. This prompted us to build stochastic, age-structured human population-dynamics models incorporating hunter-gatherer demographic rates and palaeoecological reconstructions of environmental carrying capacity to predict the founding population necessary to survive the initial peopling of late-Pleistocene Sahul.

As ecological modellers, we are often asked by other scientists to attempt to render the highly complex mechanisms of entire ecosystems tractable for virtual manipulation and hypothesis testing through the inevitable simplification that is ‘a model’. When we work with scientists studying long-since-disappeared ecosystems, the challenges multiply.

Add some multidisciplinary data and concepts into the mix, and the complexity can quickly escalate.

We do have, however, some powerful tools in our modelling toolbox, so as the Modelling Nodefor the Australian Research CouncilCentre of Excellence for Australian Biodiversity and Heritage (CABAH), our role is to link disparate fields like palaeontology, archaeology, geochronology, climatology, and genetics together with mathematical ‘glue’ to answer the big questions regarding Australia’s ancient past.

This is how we tackled one of these big questions: just how did the first anatomically modern Homo sapiens make it to the continent and survive?

At that time, Australia was part of the giant continent of Sahul that connected New Guinea, mainland Australia, and Tasmania at times of lower sea level. In fact, throughout most of last ~ 126,000 years (late Pleistocene and much of the Holocene), Sahul was the dominant landmass in the region (see this handy online tool for how the coastline of Sahul changed over this period).

Our main challenge was figuring out how to build a demographic model of ancient hunter-gatherers, which required a lot of assistance from archaeologists and anthropologists. While we obviously cannot go back in time to measure things like fertility and survival of human beings tens of thousands of years ago, there are fortunately a lot of relevant data from modern hunter-gatherer societies. Of course, we had to make assumptions, but the resulting demographic models make a lot of demographic and ecological sense because they match what we know about the population dynamics of traditional hunter-gatherer societies.

Our next problem was trying to determine how many people these ancient landscapes could have supported — so-called carrying capacities. While carrying capacities for modern human societies are largely technology-dependent, for past peoples without intensive agriculture, there is in fact a good correlation between net primary production and total potential population size.

We therefore used hindcasted general circulation models (similar to those models we use to predict future climates) to predict temporal and spatial variation in net primary production (that is, the quantity of carbon in a landscape characteristic of plant biomass) throughout the past, from which we derived corresponding temporal and spatial variation in theoretical human carrying capacity.

With these two components (demographic models and carrying capacity), we now had the tools to ask the questions: (1) Where did the first people likely enter Sahul?; (2) Did they just happen to arrive by accident, or was it a planned and motivated activity?; and (3) Once arrived in Sahul, how many people would there need to be in the population to have any hope of surviving to the modern day?

Two main routes are generally accepted: (1) a northern route connecting the current-day islands of Mangoli, Buru, and Seram into Bird’s Head (West Papua), and (2) a southern route from Alor and Timor to the now-drowned Sahul Shelf off modern-day Kimberley (see figure below).

Coupling our demographic models for each island with the drift models, we determined that the most likely route was the northern one, although even the southern route was plausible (but just a little less likely). Another major conclusion was that these first people would almost certainly have had to plan and implement open-ocean travel with the express goal of reaching the next islands in the chain, and eventually to Sahul. This is because the probability of passively drifting to an adjacent island, and then surviving to produce a viable population there (and so on), is far too small to be reasonable.

The results of the voyage-modelling pathways described above are published in a companion paperin Scientific Reports.

The last big question — how many people are needed to ensure a viable population — was the subject of the Nature Ecology and Evolution paperwe just published. There are some fundamental rules in conservation ecology and genetics about this very subject, but genetic considerations in particular can only really infer effectivepopulation sizes (Ne), rather than census (Nc) population sizes. Because the ratio of Ne:Ncis usually unknown (and highly variable among populations), we instead need demographic models to provide estimates of minimum viable Nc.

Our simulations indicate that at least 1,300 people likely arrived in a single migration event to Sahul, regardless of the route taken. Any fewer than that, and they probably would not have survived, for the same reasons that it is unlikely that an endangered species can recover from only a few remaining individuals.

Alternatively, the probability of survival was also large if people arrived in smaller, successive waves, averaging at least 130 people every 70 or so years over the course of about 700 years.

This suggests that the peopling of Sahul could not have been an accident or random event — it was very much a planned and well-organised maritime migration. Our results are similar to findings from several studies that also suggest this number of people is required to populate a new environment successfully, especially as people spread out of Africa and arrived in new regions around the world.

The overall implications of these two companion studies are fascinating. They verify that the first ancestors of Aboriginal, Torres Strait Islander, and Melanesian people to arrive in Sahul possessed sophisticated technological knowledge to build watercraft, and they were able to plan, navigate, and make complicated, open-ocean voyages to transport large numbers of people toward targeted destinations.

Our results also suggest that they did so by making many directed voyages, potentially over centuries, providing the beginnings of the complex, interconnected Indigenous societies that we see across the continent today.

These findings are a testament to the remarkable sophistication and adaptation of the first maritime arrivals in Sahul tens of thousands of years ago.

This post is co-authored by Corey Bradshaw and Frédérik Saltré, with contributions from Laura Weyrich, Sean Ulm & Michael Bird